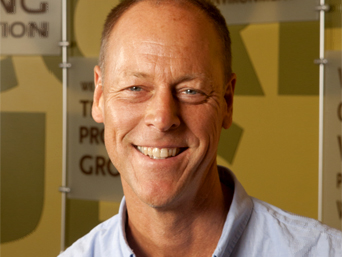 In 1976, Robb begged and borrowed $10,000 to transform an old auto garage in Weaverville, California, into his own natural foods store, Mountain Marketplace. He ran this natural foods store for more than 10 years, gaining business acumen on the job. Robb threw himself into community building there through participation in planning commission meetings and the historical society. He even co-authored a book, Trinity County Historic Sites and formed a utility district to take advantage of the County of origin electricity reserve at the Trinity River Dam, putting the county into the power business.

After that, Robb moved to the Bay area to manage the Berkeley Living Foods store, and ultimately became the manager for all three of that company’s stores.

In 1989, Walter enjoyed a taste of the vendor side of the grocery business when he signed on to market and sell a local brand of organic rice. At this time, Robb gained a wealth of knowledge about the fundamentals of the natural foods business by meeting and selling to every small grocer in and around the San Francisco area.

Three years later, he was ready to return to the business of running stores, this time wanting to build his own. Many of his former Living Foods employees were eager to join him after he secured a lease in Mill Valley, California, and raised half the capital he needed to open the store. At that point, Whole Foods Market had called on Robb twice to join their team.

In 1989, John Mackey made Robb an offer he could not refuse – build and run the Mill Valley store as a Whole Foods Market. In 1992, Walter opened Whole Foods Market’s twelfth store where he was the Store Team Leader for one year before becoming the President of the Northern Pacific Region where he served eight years. Under Robb, the region grew from two to 17 stores, including four acquisitions.

Robb is an ardent organic advocate; he works his own organic garden and has served on the Board of Directors of the Organic Trade Association and the Organic Center for Education and Promotion.

He graduated Phi Beta Kappa from Stanford University in 1976 and is a proud father and grandfather with two sons, a daughter, and four grandchildren.