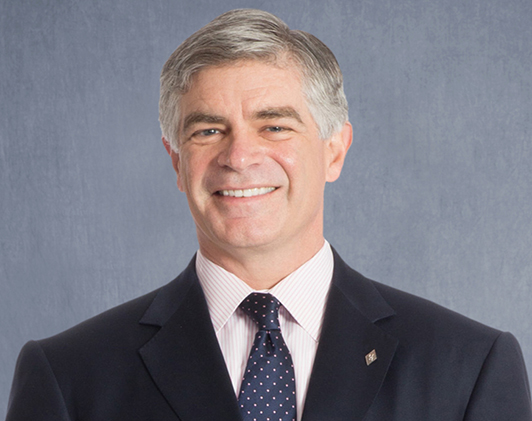 Patrick T. Harker took office on July 1, 2015, as the 11th president and chief executive officer of the Federal Reserve Bank of Philadelphia. In this role, Harker participates on the Federal Open Market Committee, which formulates the nation’s monetary policy.

Before taking office at the Philadelphia Fed, Harker was the 26th president of the University of Delaware. He was also a professor of business administration at the university’s Alfred Lerner College of Business and Economics and a professor of civil and environmental engineering at the College of Engineering.

Before joining the University of Delaware in 2007, Harker was dean and Reliance Professor of Management and Private Enterprise at the Wharton School of the University of Pennsylvania. Prior to being appointed dean in 2000, Harker was the Wharton School’s interim dean and deputy dean as well as the chair of its Operations and Information Management Department. In 1991, he was the youngest faculty member in Wharton’s history to be awarded an endowed professorship as UPS Transportation Professor of the Private Sector. He has published/edited nine books and more than 100 professional articles. From 1996 to 1999, he served as editor-in-chief of the journal Operations Research.

In 2012, Harker was named a fellow of the Institute for Operations Research and the Management Sciences (INFORMS) and a charter fellow of the National Academy of Inventors. He was also named a White House fellow by President George H. W. Bush in 1991 and was a special assistant to FBI Director William S. Sessions from 1991 to 1992.

Harker is a board member of both the Chamber of Commerce for Greater Philadelphia and its Select Greater Philadelphia Council. He is also a board member at the Science Center in Philadelphia. Previously, he was on the boards of Catholic Relief Services, Pepco Holdings, Inc., and Huntsman Corporation and was a founding member of the board of advisors for Decision Lens, Inc. He was also a nonbanking Class B director of the Philadelphia Fed from 2012 to 2015. Harker has a Ph.D. in civil and urban engineering, an M.A. in economics, and an M.S.E. and B.S.E. in civil engineering, all from the University of Pennsylvania.