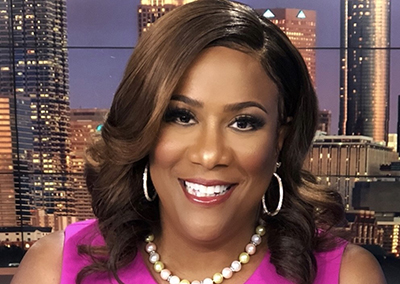 A long-time Atlanta resident, Karyn has recently been named evening anchor at the number one station in Atlanta, WSB TV.  You can look for Karyn to begin at the ABC powerhouse in the fall. She  is well known in Atlanta for having more than three decades of hands-on community involvement. She is the past president of the Atlanta Press Club and currently serves on the Board of Governor’s for the National Academy of Television, Arts & Sciences.Karyn is the recipient of six Southeast Emmy awards, two awards from the Atlanta Association of Black Journalists and a Salute to Excellence award from the National Association of Black Journalists. Karyn is a member of the Magnolia chapter of The Links Inc, a charter member of the Greater North Atlanta Chapter of Jack and Jill of America Inc., on the board of Pebble Tossers inc.

Karyn received her bachelors the University of Illinois in Champaign Illinois    Throughout her career Karyn has been the recipient of numerous awards honoring both her professional work and community contributions. she has consistently been named one of Atlanta’s 100 Women of Influence by the Atlanta Business League and featured as a powerhouse in Who’s Who in Black Atlanta.