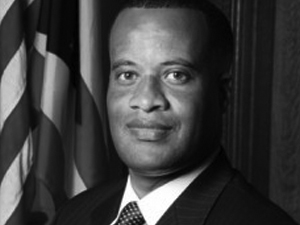 Jay Williams was appointed by President Obama to serve as the Assistant Secretary of Commerce for Economic Development and was sworn into office on Tuesday, May 20, 2014.

As the Administrator of the U.S. Department of Commerce’s Economic Development Administration (EDA), Williams is charged with leading the federal economic development agenda by promoting innovation and competitiveness, preparing American regions for growth and success in the global economy.

Prior to joining the Department of Commerce, Jay served as the executive director of the Office of Recovery for Auto Communities and Workers. In this capacity, he worked directly with state and local stakeholders in areas affected by the changing American automotive industry to deliver federal support to ensure they returned to better economic condition.

He also served in the White House as Deputy Director for the White House Office of Intergovernmental Affairs. In this position, he led efforts to engage mayors, city council members, and county officials around the country.

Williams is the recipient of the 2007 John F. Kennedy New Frontier Award. The JFK Library Foundation, in conjunction with the Harvard University Institute of Politics, annually recognizes two exceptional young Americans- under the age of 40, whose contributions in elective office, community service or advocacy demonstrate the impact and value of public service in the spirit of President John F. Kennedy.

Prior to being elected, Williams spent five years as the Director of Community Development for the city. Before transitioning into public service, Williams enjoyed a distinguished career in banking, which included stints at the Federal Reserve Bank of Cleveland and First Place Bank, as a vice president.

Assistant Secretary Williams was born and raised in Youngstown. He graduated from Youngstown State University with a B.S.B.A., majoring in finance.