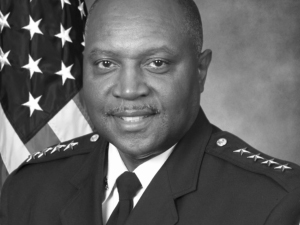 George N. Turner is a dedicated and loyal public safety professional currently overseeing the operations of the largest law enforcement agency in the State of Georgia.  On July 9, 2010, Turner was appointed by Atlanta’s Mayor Kasim Reed as the 23rd Chief of Police for the City of Atlanta.

Chief Turner is a 34-year veteran of the Atlanta Police Department, which has an authorized strength of 2,034 sworn officers.  His goal for the Department is to target gang violence, alleviate aggressive panhandling, and enhance police officer recruitment efforts.  In addition, Chief Turner is adamant in ensuring that the department has the most advanced technology and striving to continue improving the partnership with our communities. Highly respected throughout the Atlanta community, Chief Turner’s resilience and leadership qualities will continue to instill accountability in the effective delivery of police services.

Chief Turner’s career has been diversified and filled with accomplishments. He has worked in all areas of the department to include the uniform division and investigations. Since taking command of the department overall crime has continued to decline to the lowest levels since the 1960s.

Chief Turner has received numerous commendations and awards from the Secret Service and the Federal Bureau of Investigation for his work on protective details with the various Presidents, other high-level officials and heads of state. He has also worked closely with the State of Georgia and other local law enforcement agencies on a wide array of special assignments and details.

He is also the past Chair of the Atlanta METROPOL and board member of Georgia International Law Enforcement Exchange (GILEE), the past Board Chair of High Intensity Drug Trafficking Area (HIDTA) and a member of the, International Association of Chiefs of Police, the Research Analysis Committee, the National Organization of Black Law Enforcement Executives (NOBLE), and the Police Executive Research Forum. Chief Turner has also completed the FBI National Executive Institute training session, Class #34.

Chief Turner was educated in the Atlanta Public Schools and attended Clark Atlanta University. In 2003, he was selected as a member of the Clark Atlanta University Athletic Hall of Fame. He holds a Bachelors of Art degree from Saint Leo University in Criminal Justice and a Masters in Public Administration from Columbus State University. In 2013, Chief Turner was chosen as the Columbus State University Alumni of the Year. He completed the United States Secret Service Academy, Small Detail Training, Police Executive Research Forum (Senior Management Institute) and Georgia Association of Chiefs of Police, Command College.

He is married to Cathy Turner for 34 years and they are the parents of four adult children and seven grandchildren.