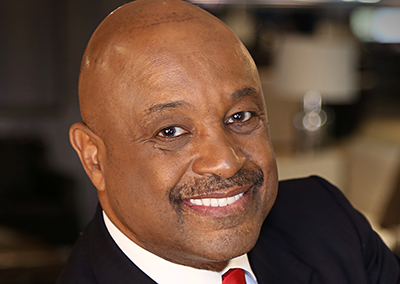 There are many motivational speakers, and then there is the one, the only, the incomparable Dr. Willie Jolley. He truly is a renaissance man! He’s a triple threat personality and a global thought leader. He is a Hall of Fame speaker, an award-winning singer and a popular national radio and television personality. In addition, he is the author of several international best-selling books.

Dr. Willie Jolley has achieved remarkable heights in life, after coming from humble beginnings. His father died when he was a teenager and he put himself through college by singing in nightclubs and recording jingles for radio and television commercials. He went on to become a multi WAMMIE (Washington Area Music Association) Award winning nightclub performer. Yet, at the top of his nightclub career, he was fired and replaced by a karaoke machine, during the karaoke craze that swept America!

Dr. Jolley decided that he was not going to give up, so he took that setback and turned it into an amazing “Comeback!” He has gone on to be named “One of the Outstanding Five Speakers in the World” and “Motivational & Inspirational Speaker of The Year” by the 175,000 members of Toastmasters International. In 2005, he was inducted into the prestigious Speaker Hall of Fame and received the CPAE Award (Council of Peers Award of Excellence).

He has achieved the distinction of Certified Speaker Professional (CSP) by the National Speakers Association. And in 2012, was a recipient of the Ron Brown

Distinguished Leadership Award. In 2013, he was named “One of the Top 5 Leadership Speakers” by Speaking.com. In 2018, he was named a “Legend of The Speaking Industry” by the Veterans Speakers Association.

Dr. Jolley started his speaking career as a drug prevention coordinator for the DC Public School System and went on to speak to millions of young people around the world.  He produced and starred in the first PBS Special for teens, Dare To Dream, Dare To Win, which has become the #1 selling youth video in America.  He was named “One of America’s Top Youth Speakers” by Future Business Leaders of America (FBLA).

Dr. Jolley soon started receiving speaking requests from other industry sectors and went on to great success speaking to colleges, associations, and corporations. He was the expert Ford Motors called on in 2006, when they were on the brink of bankruptcy. He worked with Ford from 2006 to 2009, and they were able to reject a government bailout and go on to billion-dollar profits.

Dr. Willie Jolley became the featured speaker for The Moneywise National Tour in 2012 and in 2014 he was chosen to replace the legendary Zig Ziglar on the National Get Motivated Tour. On that tour he joined a who’s who of world-renowned speakers such as Les Brown, Shark Tank star Daymond John and sales guru, Tom Hopkins. Dr. Jolley was recently invited to be an “Personal Development Expert Artist in Residence” at High Point University, where Dr. Nido Qubein is president. He joins a list of high-profile individuals including Steve Wozniak, co-founder of Apple Inc., and best-selling author and leadership guru, Dr. John Maxwell.

Dr. Willie Jolley uses his public platform to pursue his mission of empowering and encouraging people to rise above their circumstances and maximize their God-given potential! No matter the venue, from his exciting global television appearances to his Sirius XM radio show to corporate audiences like Walmart, General Motors, Comcast, Verizon, Marriott, Johnson, and Johnson Dubai, Coca-Cola US, Coca-Cola South Africa, Prudential Australia, and Prudential Malaysia or The Million Dollar Round Table. Dr. Willie Jolley keeps it moving with high energy and enthusiasm. He delivers powerful nuggets on how every person can live a better life and win more, every day!

Dr. Willie Jolley is the author of several international best-selling books including, It Only Takes A Minute To Change Your Life, A Setback Is A Setup For A Comeback, Turn Setbacks Into Greenbacks and An Attitude of Excellence (which was endorsed by former Ford Motors CEO, Alan Mulally and Dr. Stephen Covey, author of the landmark book, The 7 Habits of Highly Effective People). And contributing author of Chicken Soup for The Christian Soul, where he is featured on the front cover with Joyce Meyer, Dr. Tony Campolo and Naomi Rhode. Dr. Jolley is co-author, with his wife of 37 years, Dee Taylor-Jolley, of the popular marriage book, Make Love, Make Money, Make It Last – 10 Secrets To Shape A Great Marriage!

Dr. Jolley is a popular media personality and can be heard daily on the syndicated “Get Up Mornings with Erica Campbell” show on the Radio One Network and weekly on his #1-rated The Willie Jolley Wealthy Ways Show on Sirius XM Channel 141.  His popular podcast, The Willie Jolley Wealthy Ways Podcast, can be heard on iHeart Radio, C-Suite Radio, Spotify, Stitcher, TuneIn, and Apple Podcasts. All his radio and podcast programs are now sponsored by Truist Financial.

Additionally, his “Dr. Willie Jolley Motivational Minute” daily TV program was a popular staple on many television stations across America and now is available globally on Facebook, YouTube, and Instagram, where Walmart has been a sponsoring partner. Dr. Jolley and his wife host a weekly marriage advice show called “Make Love, Make Money, Make It Last!…The Broadcast with Dr. Willie and Dee Jolley,” airs Monday nights at 9 pm ET on Facebook Live, Instagram Live, and LinkedIn Live. All episodes can also be found on his YouTube channel at HappilyMarriedMondays.com

He holds an earned Doctorate (D. Min) Degree in Faith-Driven Achievement from the California Graduate School of Theology, a Master’s Degree in Theology from Wesley Theological Seminary, and a B.A. in Psychology and Sociology from American University. Dr. Willie Jolley resides in Washington, DC and shares his life with his wife, Dee, his two adult children and two grandchildren.