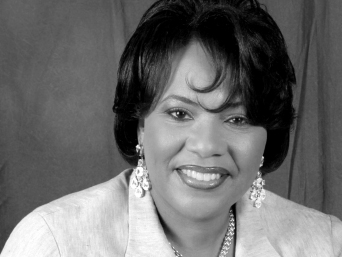 Bernice A. King (Be A King) is the Chief Executive Officer of The King Center, which was founded by her mother, in 1968. She was appointed to this position in January 2012 by the Board of Trustees. Nationally and internationally known as one of the most powerful, motivating and life-changing orators and speakers on the circuit today, Bernice leaves her audiences speechless and challenges people to RAISE THE STANDARD. Born the youngest daughter of the late Coretta Scott King and Dr. Martin Luther King, Jr., Bernice began her oratorical journey when she spoke in her mother’s stead at the United Nations at age 17. Over the years, she has had the occasion to speak in such places as The White House, DuPont Corp., Warner-Lambert Corporation, AT&T, NIKE, USANA Health Sciences, University of Toledo, Xavier University, University of North Carolina, Duke University, Pepperdine University, Department of Defense, Salvation Army, and in such places as Sydney, Australia, Lubeck, Germany, Auckland, New Zealand and South Africa to name a few. In the summer of 2000, she narrated the “Lincoln Portrait” along with a symphony orchestra in Keil, Germany at the Schleswig-Holstein Musik Festival.

Bernice is a graduate of Spelman College with a Bachelor of Arts degree in Psychology and a Masters of Divinity and Doctorate of Law Degrees from Emory University. She has also received an honorary Doctorate of Divinity degree from Wesley College. She is currently a member of the State Bar of Georgia. On January 30, 2007, the 1st year anniversary of her mother’s death, Bernice returned to her alma-mater at Spelman College to announce the establishment of the “Be A King Scholarship in honor of Coretta Scott King.”

Bernice serves on the HOPE Southeastern Board of Directors of Operation HOPE and the Board of the inaugural Regions Diversity Advisory Council for Regions Financial.

With a strong concern for youth, community and family partnership, Bernice was privileged to serve as a law clerk in the Fulton County Juvenile Court system, under Judge Glenda Hatchett, who was host of the nationally syndicated Judge Hatchett show. It was there that she realized that a growing number of teens have been double victims: first of society and secondly of an ineffective legal system based in retribution instead of rehabilitation. She has also served as a mentor to a group of 5th grade girls at an inner-city Atlanta elementary school, where she spent time molding their character and values so that one day they too would become a force to be reckoned with in the world. In keeping with this vision, in 2007 Bernice spoke at the inauguration of the Coretta Scott King Young Women’s Leadership Academy (CSKYWLA) where she gave the charge to the 6th grade girls who would be attending the new all-girls school. She reminded them that they were making history because they were among the first chosen to attend this school and as a result they would be expected to set the trend that others would follow. She continues to serve as a mentor for the young ladies at CSKYWLA. In January of 2011, Bernice launched the “100 Days of Nonviolence” campaign at CSKYWLA to expose them to nonviolence as modeled by Dr. Martin Luther King, Jr. (“Kingian Nonviolence”), and to encourage them to begin embracing it as a way of life. She challenges these young ladies to
combat bullying, fighting, and negative attitudes by using their tongue in a manner that is positive and uplifting.

Through her work at the King Center, Bernice has continued to educate youth about the Kingian Nonviolence principles modeled by her parents. In 2012, she implemented an annual N.O.W. Encounter Summer Youth Camp which has trained youth from as far as Cyprus, Greece. This year, as she continued her parent’s legacy, she spearheaded the global events that took place in Washington, DC to commemorate the August 28, 2013, 50th Anniversary of the March on Washington and her father’s famous “I Have A Dream” speech. Additionally, last month, in the spirit of her father, she was an instrumental factor in helping Aboriginals and others in Vancouver, Canada understand the importance of forgiveness, unconditional love and reconciliation, when she spoke to a crowd of over 75,000 people.

Bernice founded Be A King, whose mission is to re-brand and re-image generations of people to elevate the way they Think, Act, Live, and Lead. In September 2007, she launched the first Be A King Summit in Montgomery, Alabama on the campus of Alabama State University. Through Be A King she hopes to develop a nation of young people who will impact the global marketplace and transform the world culture with a KINGdom mindset.

Bernice has been featured on such shows as, Oprah, BET Talk with Tavis Smiley and the Judge Hachett Show to name a few and in such magazines as People Magazine, Ebony, Essence, Ladies Home Journal, Gospel Today and Charisma Magazine. In 2005, the American Legacy Magazine recognized her as a “Woman of Strength and Courage.” She has also guest hosted a live lunchtime television show on CNN. In April 2008, Bernice was one of the fifteen delegates selected to meet Pope Benedict XVI during his visit to the United States. She also received the “2009 Lifetime Achievement Advocate Award” from the National Coalition of 100 Black Women, Inc.

As an author, she has to her credit, her book, Hard Questions, Heart Answers, a compelling and inspiring book.

From September 2010 through August 2011, Bernice did a weekly hour and a half radio segment entitled: “Raise the Standard” on Praise 102.5 FM in Atlanta with Rhodell Lewis. She covered a broad array of topics which included: Immigration Reform, Educational Reform, Health and Wellness, Teen Violence, Teen Sexuality, High School Dropout, Voting Responsibility, Love, Forgiveness and Reconciliation, Why Should I Marry?, Being Single and Celibate, Childproofing your Children, and Parenting on the Edge.

Creative, captivating, challenging, compelling and courageous are a few words that describe THIS King! Be A King is a woman gifted to change the lives of those who come into contact with her.