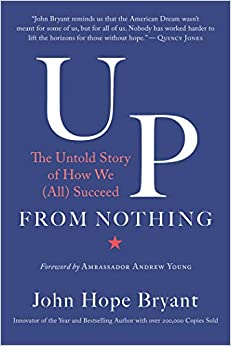 Up from Nothing: The Untold Story of How We (All) Succeed
John Hope Bryant
October 2020

Facing a challenging economy, too many Americans despair of improving their lives. But John Hope Bryant insists that America is still the Land of Opportunity. Up from Nothing revives the forgotten story of the American Dream. It’s about our beginnings as a nation of go-getters who believed they were winners before they won.

Using the inspiring story of his own rise from humble beginnings, and that of his parents and grandparents, Bryant shows how individually we can change our mindset from survivor to thriver to winner and move beyond just getting by or being financially independent to becoming wildly successful. Collectively, we need to become a nation of winners once again. 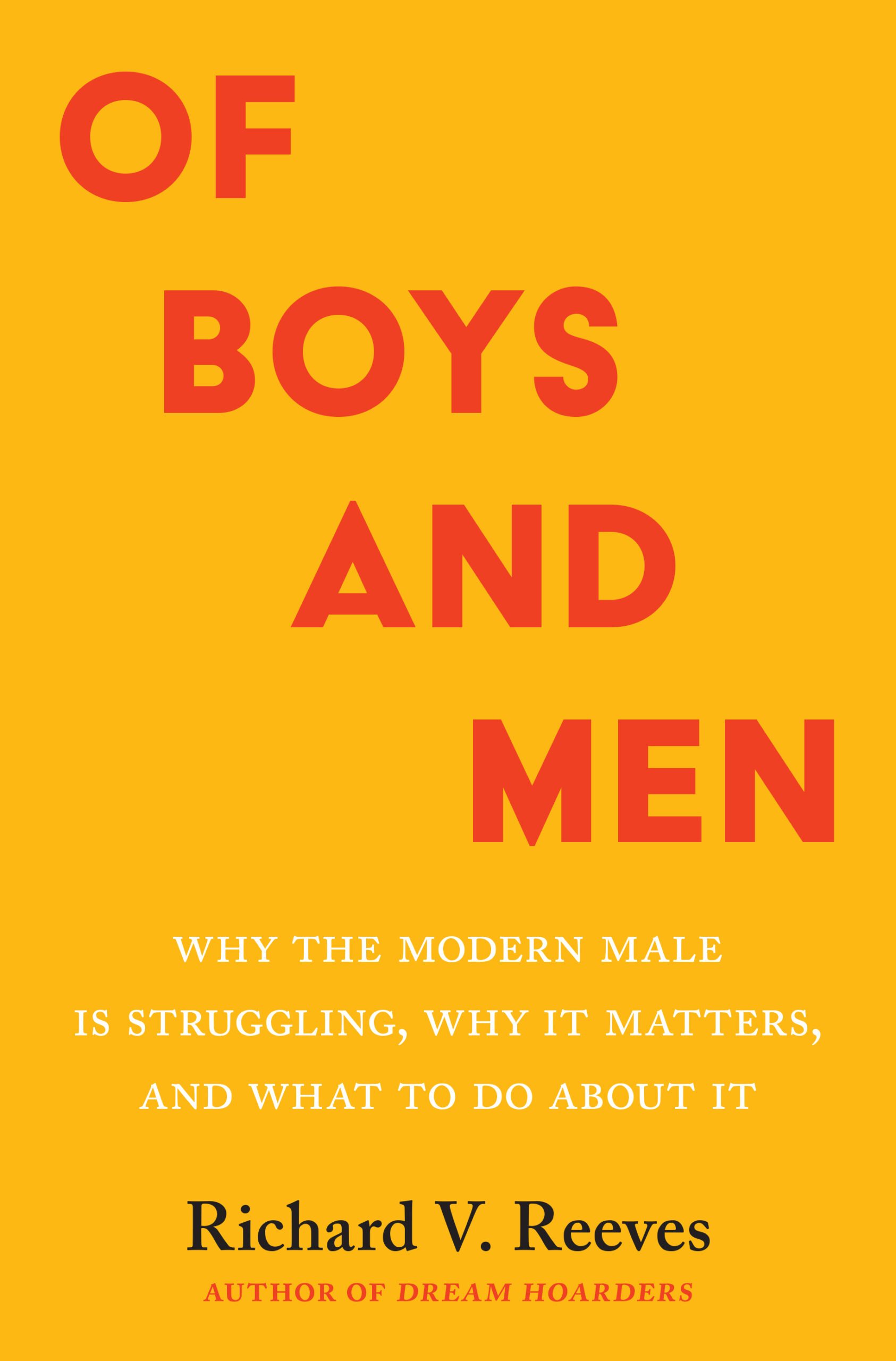 Of Boys and Men | Why the Modern Male is Struggling, Why it Matters, and What to Do about It
Richard V. Reeves
September 2022

Boys and men are struggling: in the classroom, the workplace, and in the family. While the lives of women have changed, the lives of men remain largely the same. In his urgently needed new book Of Boys and Men: Why the Modern Male Is Struggling, Why It Matters, and What to Do about It (Brookings Institution Press; September 27, 2022), Brookings Institution scholar and father of three sons Richard V. Reeves examines this crisis and argues that helping our boys and men does not mean abandoning the ideal of gender equality.

“We can hold two thoughts in our head at once. We can be passionate about women’s rights and compassionate toward vulnerable boys and men,” Reeves contends. 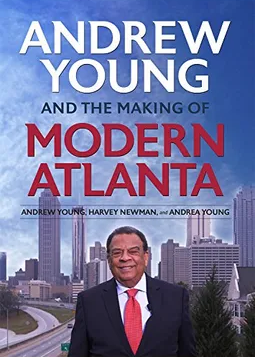 ANDREW YOUNG AND THE MAKING OF MODERN ATLANTA tells the story of the decisions that shaped Atlanta’s growth from a small, provincial Deep South city to an international metropolis impacting and influencing global affairs. When Mayor William Hartsfield coined the term “City too Busy to Hate” in the 1950s, who would have imagined that within fifty years Atlanta would have the world’s busiest airport, rank as the eighth largest metropolitan area in the United States or, that this once racially-segregated city would host the Centennial Olympic Games and play host to the world in 1996?

Andrew Young arrived in Atlanta in 1961 and has played a key role in Atlanta’s development ever since–in the Civil Rights Movement, as the city’s representative in Congress, and as Mayor. The authors have woven this perspective with archival material, media accounts, and the reflections of scores of other key elected officials, community, business, and civic leaders, and civil servants on the making of modern Atlanta. 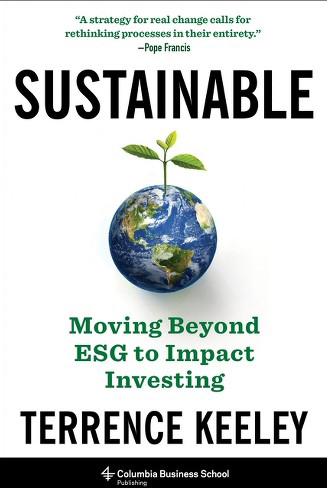 Should business and finance play larger roles in resolving the great social and environmental challenges of our time? Proponents of environmental, social, and governance (ESG) investing say yes. They argue that ESG financial strategies can help reverse runaway carbon emissions and fix income and gender inequalities, among other ills. ESG-integrated investments already encompass more than $120 trillion in financial assets. Are they working as promised? If not, how can they be improved?

In Sustainable, a finance-industry veteran offers an insider’s look at the promises, prospects, and perils of ESG investing. Terrence Keeley argues that many ESG advocates have been overly optimistic about what it can accomplish. Divestment threats are ineffective tools for altering corporate behavior, and verifiably “good” companies do not systematically generate great returns. 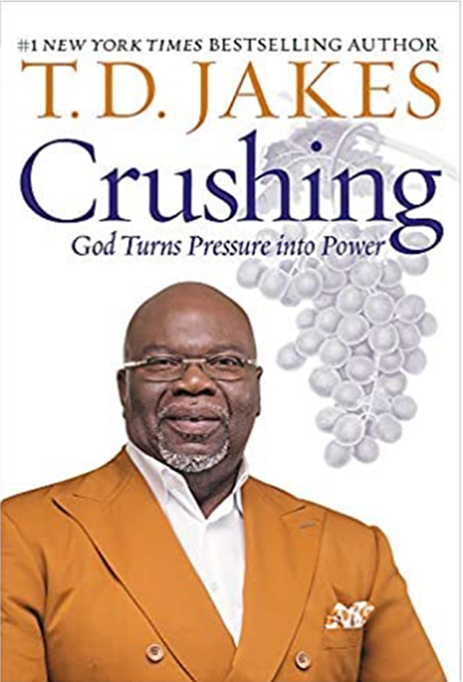 In this insightful book, #1 New York Times bestselling author T.D. Jakes wrestles with age-old questions: Why do the righteous suffer? Where is God in all the injustice?

Bishop Jakes tells crushing personal stories from his own journey — the painful experience of learning his young teenage daughter was pregnant, the agony of watching his mother succumb to Alzheimer’s, and the shock and helplessness he felt when his son had a heart attack. 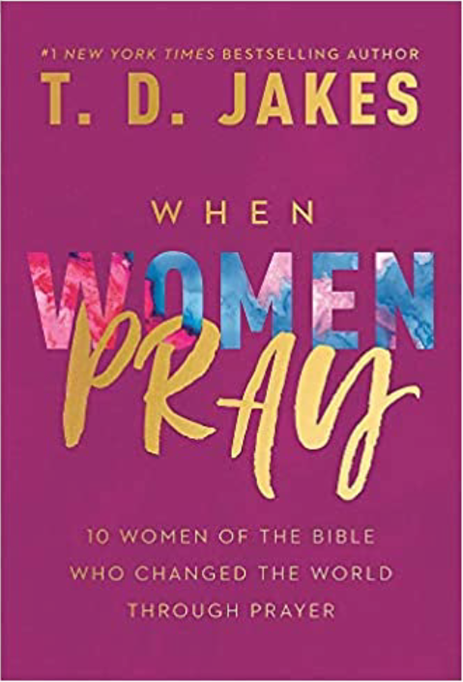 When Women Pray: 10 Women of the Bible Who Changed the World through Prayer
Bishop T.D. Jakes
September 2020


In a time when women carry more influence than any other generation, the power of prayer has never been more important to remind us that we do not have to bear our crosses alone. We need prayer to stand guard over our hearts and minds and over the hearts and minds of our families.

Women today are shattering glass ceilings and forging new paths in the world. What Happens When a Woman Prays is a clarion call for women to continue their progressive march of empowerment by dreaming like their daughters and praying like their grandmothers. 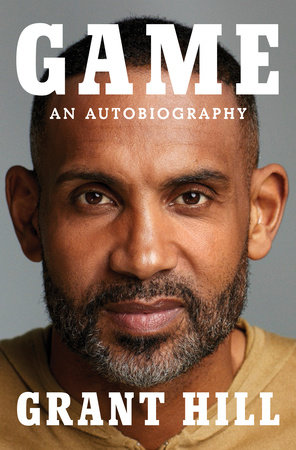 Grant Hill always had game. His choice of college was a subject of national interest, and his arrival at Duke University cemented the program’s arrival at the top. In his freshman year, he led the team to its first NCAA championship, and three championship appearances in four years. His Duke career produced some of the most iconic moments in college basketball history, and Coach K proved to be a lifelong mentor. Later, as one of the NBA’s best players and a new face of the Detroit Pistons franchise, Hill was the first person with the potential to give Michael Jordan a run for his money, not just as a player but as a brand. His $45 million rookie contract was almost the least of it. He turned down Nike for Fila, and soon Method Man and Tupac Shakur were wearing his shoes. 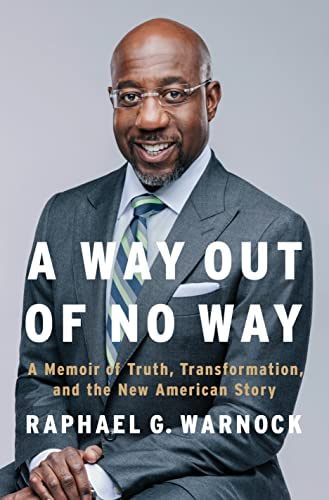 A Way Out of No Way | A Memoir of Truth, Transformation, and the New American Story
Raphael G. Warnock
June 2022

On the heels of his historic election to the United States Senate, Raphael G. Warnock shares his remarkable spiritual and personal journey.

“Sparkling… a narrative of an extraordinary life, from impoverished beginnings in Savannah to his arrival on Capitol Hill. Along the way, he reflects with considerable candor and insight on the meaning and importance of faith, truth-telling and political and social redemption.”—The New York Times Book Review