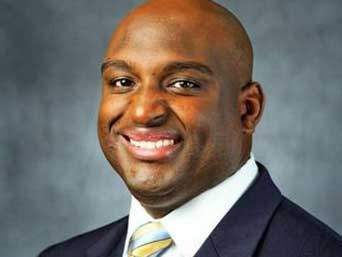 Rodney Bullard is currently Vice President of Community Affairs at Chick-fil-A, Inc. and Executive Director of the Chick-fil-A Foundation where he leads the company’s corporate community and philanthropic strategy, which is focused on fostering youth and furthering education. Before coming to Chick-fil-A, Rodney served as an Assistant United States Attorney prosecuting complex criminal cases. For his service, the United States Attorney General presented him with the Department of Justice Director’s Award. Prior to this role, Rodney was selected as a White House Fellow, the nation’s most prestigious public service Fellowship. As a White House Fellow, Rodney was placed at NASA working directly for the NASA Administrator. A decorated veteran, Rodney also served in the United States Air Force Judge Advocate General Corps eventually working at the Pentagon as a Congressional Legislative Liaison in the Office of the Secretary of the Air Force.
Rodney is a an alumnus of the United States Air Force Academy, Duke University School of Law, the University of Georgia’s Terry School of Business and the Harvard Business School’s Advanced Management Program. Rodney currently serves on several national and local boards of directors to include: the Salvation Army National Advisory Board of Directors, the University Of Georgia Terry School Of Business Board of Directors, the Junior Achievement USA National Board of Directors, the Professional Association of Georgia Educators (PAGE) Foundation Board of Directors, and the Leadership Atlanta Board of Directors.