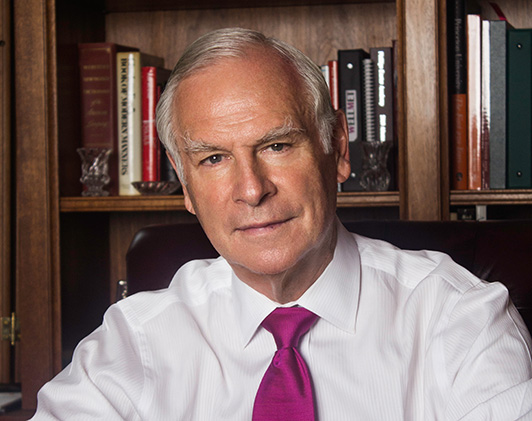 Peter Andrew Georgescu, Chairman Emeritus of Young & Rubicam, was born on the eve of the Second World War in Bucharest, Romania. His Romanian parents were educated in England and France. Peter’s father was the Managing Director of Exxon’s operation in Romania. While on a business trip to New York in 1947, the Iron Curtain fell and Peter’s parents could not return to Romania. Overnight they became the enemy of the Communist regime (his father would have been killed if he’d returned to Romania).

Peter and his brother were left in Romania with his grandparents and would remain apart from his mother and father for eight years. His grandfather was seized and imprisoned as a political threat, and then murdered in captivity. Shortly after his grandfather was taken away, Peter, only ten years old, was arrested along with his brother and grandmother and sent to a work camp. In 1953 his father was approached by Romanian Communist diplomats in New York and asked to spy for them in exchange for keeping his children alive. Georgescu’s parents refused and went to the press, causing an international scandal. With the intervention of Congressman Frances Bolton and President Eisenhower, the boys were reunited with their parents in April of 1954.

Under Peter’s leadership, Young & Rubicam Inc.–at that time an integrated marketing and communications firm comprised of YR Advertising, Burson-Marsteller PR, Wunderman Direct Marketing, Landor Design, Cohn and Wolfe PR–successfully transformed from a private to a publicly held company. During his tenure, Young & Rubicam built the most extensive database on global branding and, from its findings, developed a proprietary model for diagnosing and managing brands. Within the marketing community, he is known as a leading proponent of creating unified communications programs, agency accountability for measuring the impact of communications programs, and structuring value-based agency compensation.

In recognition for his contributions to the marketing and advertising industry, Peter was inducted into the Advertising Hall of Fame and received several Honorary Doctorate of Humanity degrees and other recognition from several colleges and universities.

Most recently, Peter has been a leading proponent of business governance transition from shareholder primacy to stakeholder capitalism. He has spoken widely on the subject throughout the country including both the Aspen Institute and the Commonwealth Club, has consulted with the Business Roundtable, Congressional committees and is actively involved in expanding Just Capital’s mission and ability to hold corporations accountable for their just actions.

Peter has served on eight public company boards and continues as a Vice Chairman of New York Presbyterian Hospital, Director of Just Capital, Paul & Daisy Soros Fellowships for New Americans, and a trustee of Exeter Academy and several other nonprofit organizations.

He has authored three books: Capitalists, Arise!, The Source of Success and The Constant Choice.