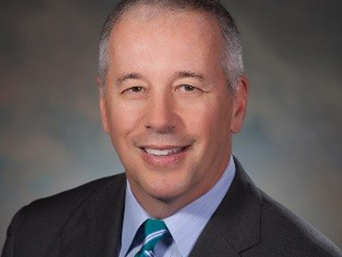 Mike Hart joined Regions in 2002 and oversees the commercial and retail operations for the Midwest Area which includes Missouri, Illinois, Iowa and Western Kentucky. Regions Financial Corporation, with $125 billion in assets, is a member of the S&P 500 Index and one of the nation’s largest full-service providers of consumer and commercial banking, wealth management, mortgage and insurance products and services. Regions serves customers across the South, Midwest and Texas, and through its subsidiary, Regions Bank, operates approximately 1,600 banking offices and 2,000 ATMs.

Hart’s industry expertise spans three decades and includes a wide variety of corporate and field leadership roles. Prior to serving in his current capacity as Midwest Area President, he held the Area President position for Indiana/Illinois/Eastern Kentucky. He has led various corporate divisions within the Business Services Group, including Commercial Banking Administration Executive.

Hart is a native of Bloomington, Illinois. He earned a bachelor’s degree from the University of Illinois and a master’s degree in Business Administration from Bradley University. Hart is also a graduate of Stonier Graduate School of Banking and the ABA Commercial Lending School.