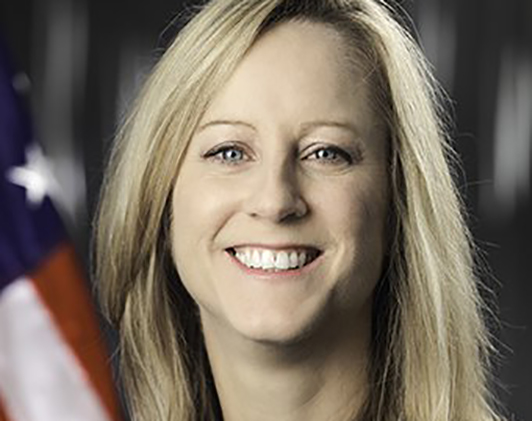 Kathy Kraninger became Director of the Consumer Financial Protection Bureau in December, 2018. From her early days as a Peace Corps volunteer, to her role establishing the Department of Homeland Security, to her policy work at the Office of Management and Budget (OMB) to the CFPB, Director Kraninger has dedicated her career to public service.

Director Kraninger came to the CFPB from the Office of Management and Budget, where as a Policy Associate Director she oversaw the budgets for executive branch agencies including the Departments of Commerce, Justice, Homeland Security (DHS), Housing and Urban Development, Transportation (DOT), and Treasury, in addition to 30 other government agencies.

Ms. Kraninger also served in executive branch posts with the Department of Transportation. There, after the terrorist attacks on September 11, 2001, she volunteered to join the leadership team that set up the newly created DHS.

Her work at DHS led to awards including the Secretary of Homeland Security’s Award of Exceptional Service, the International Police and Public Safety 9/11 Medal, and the Meritorious Public Service Award from the United States Coast Guard.