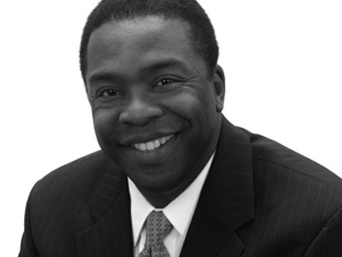 On May 17, 2011 Jacksonville voters chose Alvin Brown to lead the city. He assumed office July 1, 2011. Brown ran on his vision of “taking Jacksonville to the next level” through job creation, Downtown revitalization, and making education and public safety top priorities.

Prior to the election, Brown served as an Executive in Residence at Jacksonville University’s Davis School of Business. He is the past president and CEO of the Willie Gary Classic Foundation, an organization that helps provide scholarships for historically black colleges.

Brown served as the executive director of the Bush/Clinton Katrina Interfaith Fund. He was responsible for overseeing the distribution of more than $20 million to houses of worship throughout the Gulf Coast so that they could begin rebuilding after the disaster resulting from hurricane Katrina. Brown successfully set policy and procedures that enabled more than 1,100 houses of worship to apply for funding by the closing date of July 31, 2006.

Brown also served as chairman of the board of the National Black MBA Association. As chairman of an organization representing more than 100,000 MBA graduates, Brown encouraged young people to pursue higher education and to develop their leadership potential by greatly enhancing the scholarship program of the organization. Brown engaged in significant fundraising that positioned the organization as a premier group in the world of education and business leadership. He fostered relationships with colleges, business schools and with corporations that recognize the value of a diversified portfolio. He has been a champion of restoring public confidence in corporate America and, in the wake of numerous corporate scandals, called on business schools throughout the country to mandate ethics in their curriculum.

In Washington, D.C., Alvin Brown served as a senior member of the Clinton-Gore Administration beginning in 1993. As Vice President Al Gore’s senior advisor for Urban Policy and vice chair of the White House Community Empowerment Board, Brown advised both the vice president and President Clinton on a wide range of domestic issues, including community revitalization, job creation, new business development and expansion of the supply of affordable housing.

Brown was also co-chair of the White House Task Force on Livable Communities focusing on urban sprawl and smart growth prior to his work at the White House. He held a number of key positions within the administration, including senior advisor to the late Commerce Secretary Ron Brown and senior advisor to former U.S. Secretary of Housing and Urban Development Andrew Cuomo. While at HUD, Brown was responsible for overseeing the Department’s $100 million disaster recovery initiatives, which included leading an overhaul of the Department’s disaster response effort. Brown first came to Washington, D.C. to work as an intern for U.S. Sen. Bill Nelson (D-FL) while Nelson was serving in the U.S. House of Representatives. He then served on the Clinton-Gore transition team.

While Brown has spent many years in government service, he also has an extensive background in the private and non-profit sectors.

Brown graduated from Jacksonville University where he earned a Bachelor of Science and a Masters in Business Administration. He also completed postgraduate work at the Kennedy School of Government at Harvard University. He received an honorary doctorate from Edward Waters College in Jacksonville.

Brown is the recipient of the Frederick Douglass Award from the Southern Christian Leadership Conference, the Excellence in Community Service Award from 100 Black Men of America, the distinguished Award for Government Services from the National Baptist Convention, and the Chairman’s Award from the Congressional Black Caucus. In addition, the National Black MBA Association honored Brown with the prestigious H. Naylor Fitzhugh Award.

Brown and his wife Santhea have two sons, Joshua and Jordan.