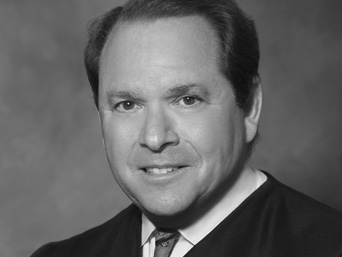 Judge Gerald E. Rosen was nominated by President George H.W. Bush to the U.S. District Court for the Eastern District of Michigan in November 1989 and was invested in March 1990. Judge Rosen became chief judge of the court Jan. 1, 2009.

Prior to taking the bench, Judge Rosen was a senior partner in the law firm of Miller, Canfield, Paddock and Stone. While at Miller Canfield, Judge Rosen was a trial lawyer, specializing in commercial, employment and constitutional litigation and litigated a number of important, high-profile cases.

Judge Rosen began his professional career in Washington, D.C., as a legislative assistant to U.S. Sen. Robert P. Griffin of Michigan. Judge Rosen served on Sen. Griffin’s staff in Washington for five years, from February 1974 through January 1979, during which time he was intimately involved in some of the most significant and challenging issues of the period. While serving as Sen. Griffin’s legislative assistant, Judge Rosen attended the George Washington University Law School at night and obtained his law degree degree in May 1979. (He is now a member of the his alma mater’s Board of Advisors). Judge Rosen’s undergraduate degree is from Kalamazoo College.

Judge Rosen has written and published numerous articles for professional journals and the popular press on a wide range of issues, including civil procedure, evidence, due process, criminal law, labor law and legal advertising. He is also a co-author of “Federal Civil Trials and Evidence,” “Federal Employment Litigation” and “Michigan Civil Trials and Evidence.” He is a contributing editor of “Federal Civil Procedure Before Trial” and the senior editor of West Publishing Co.’s Michigan Practice Guide series. For five years prior to taking the bench, Judge Rosen co-chaired the Judicial Evaluation Committee for the U.S. District Court for the Eastern District of Michigan.

For more than 20 years, Judge Rosen has been an adjunct professor of law, teaching Evidence at University of Michigan Law School, Wayne State University Law School, University of Detroit Law School and Thomas M. Cooley Law School. Judge Rosen frequently lectures at continuing legal education seminars for both lawyers and state and federal judges. He also has lectured at numerous International conferences and represented the U.S. government as part of the U.S. State Department’s Rule of Law program in Moscow and T’Bilisi, Georgia, consulting with legal scholars and judges from those nations on the draft of their constitutions and organization of their legal system. He has lectured to high-ranking Chinese judges at the Supreme People’s Court in Beijing and Egyptian judges in Cairo, as well as lecturing at Hebrew University in Jerusalem. Most recently, Judge Rosen has, through the State and Justice departments, consulted with the Judiciaries of Thailand, and the Ukraine.

Judge Rosen serves as a member of the Sixth Circuit Judicial Council. From 1995 to 2001, Judge Rosen served on the U.S. Judicial Conference’s Committee on Criminal Law. As a member of that committee, he was actively involved in developing sentencing and criminal law and procedure policy for the Judicial Branch. Judge Rosen also as selected by his colleagues to serve on the Board of Directors of the Federal Judges Association.

During his tenure on the federal bench, Judge Rosen has had wide experience in facilitating settlements between parties in a great many cases, including highly complex and challenging multi-district litigation cases and class actions, and most recently as the chief judicial mediator for the Detroit Bankruptcy case, the largest municipal bankruptcy in our nation’s history.

Beyond his professional work, Judge Rosen is involved with several charitable and community organizations, including serving on the Board of Directors of Focus: HOPE and the Michigan Chapter of the Federalist Society.