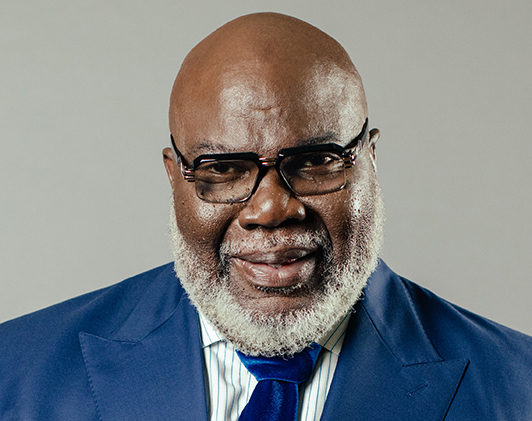 Bishop T. D. Jakes is a charismatic leader, visionary, provocative thinker, and entrepreneur who serves as senior pastor of The Potter’s House, a global humanitarian organization and 30,000-member church located in Dallas.

Named “America’s Best Preacher” by Time Magazine and CNN, Jakes’ voice reverberates from the world’s most prominent stages from the White House to the Aspen Institute to Nasrec Expo Centre in Johannesburg, South Africa.

Beyond the pulpit, Jakes’ worldwide impact is also felt through high profile conference series such as MegaFest which recently drew tens of thousands to Dallas in June 2017, world renown “Woman Thou Art Loosed” which sells out at every appearance and the standard bearer for ecclesial learning, the annual “International Pastors & Leadership” conference.

A new model for the 21st Century Renaissance man, Jakes is a committed philanthropist who gives back on an ongoing basis to the communities that he serves worldwide.

As a business leader, his media and entertainment empire spans film, television, radio, music and best-selling books, and includes an award winning music label and a self-titled talk show that aired nationally in 2016.  Viewers may now capture his ‘behind the scenes’ essence in a new subscription-based platform called “Bishop’s Village.”

Among his trademark films are “Miracles from Heaven,” the follow up to “Heaven is for Real” and a made-for-TV-film, “Faith under Fire,” as well as “Lust” and “Envy” which recently aired on the Lifetime network.  Jakes is author of dozens of New York Times books,  including “Instinct,” “Destiny”,  “Soar,” and his latest release  “Don’t Drop the Mic.”

Married to Serita for more than three decades, he is the father of five and a proud grandfather of eight.