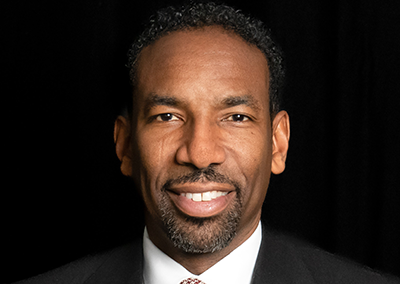 Andre Dickens is the 61st Mayor of Atlanta. A proud native of Atlanta and a product of Atlanta Public Schools, Mayor Dickens is focused on bringing opportunity and equity to the city that he loves.

Mayor Dickens’ agenda is rooted in Moving Atlanta Forward, through improving public safety, increasing opportunities for the city’s young people, empowering neighborhoods, and investing in housing and combatting homelessness, all while fostering a culture of integrity in the City. As he shared in his first State of the City address, his vision for Atlanta is:

One city with one bright future. A city of safe, healthy, connected neighborhoods with an expansive culture of equity, empowering upward mobility and full participation for all residents, embracing youth development, and an innovative, dependable government moving Atlanta forward, together.

Mayor Dickens was sworn in as Mayor in January 2022. Early accomplishments include making the City’s first-ever investment in early childhood education; the establishment of the Nightlife Division to address establishments with a history of high crime; the reestablishment of the Pothole Posse to rapidly respond to residents’ reports; and leading the successful coalition to keep Atlanta whole in opposition to a de-annexation effort.

Prior to his election as Mayor, Dickens served eight years as an at-large City Council member. He was an entrepreneur for over a decade in both the private and nonprofit sectors and a leader in Atlanta’s tech sector. Mayor Dickens is a graduate of Mays High School and holds a bachelor’s degree in chemical engineering from the Georgia Institute of Technology as well as a Master of Public Administration from Georgia State University.

Mayor Dickens enjoys spending time with his daughter, experiencing live music, attending church services, and traveling the world. He is an avid supporter of all of Atlanta’s sports teams.